Everyone's favorite newscaster has been honored as an online slot with Bally's Anchorman: The Legend of Ron Burgundy. The game started out as a physical slot machine, but it made such an impact on players that it's now available online. It boasts a lot of generous winning potential, with a top payoff of 200x your wager and a wide range of bonus features including expanding reels, multipliers, and free spins.

As you would expect, the theme is a complete homage to the 2004 comedy film starring the funnyman Will Ferrell. The icons on the reels include KVWN-TV vans, sunglasses, cowboy hats, whiskey tumblers, and Baxter, as well as the four main characters (Ron, Champ, Brian, and Baxter).

Ron is the most valuable character, paying 2.66 times your wager if you get 5 on a pay line. There's also a This Is A Wild symbol that may take the place of any other symbol save the Bonus and Whammy icons.

The Basics: How to Play  Anchorman: The Legend of Ron Burgundy Online Slot 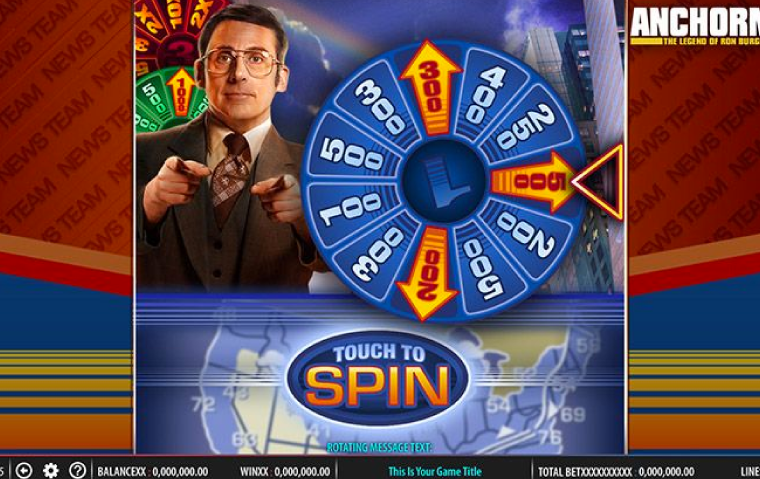 To begin playing the Anchorman slot game, first, load the slot machine on Slingo.com, then determine how much you want to stake. The game's basic controls are located at the bottom of the screen, which displays all of the reels and symbols. The + and - icons in the right-hand corner can be used to change your wager amount. Click the Spin symbol in the center of the control pad below the screen to spin the slot machine. You can view your available funds, as well as previous winnings and line-by-line winnings, at the bottom of the screen, under the control pad.

You can take Anchorman: The Legend of Ron Burgundy slot game on the go with you as a mobile slot, on your phone or tablet.

Bets on Anchorman: The Legend of Ron Burgundy slot UK starts from 75p per spin, and has a maximum bet limit of £150, perfect for those that want to push the boat out. Alongside this, it has a generous potential RTP of 96.03%. 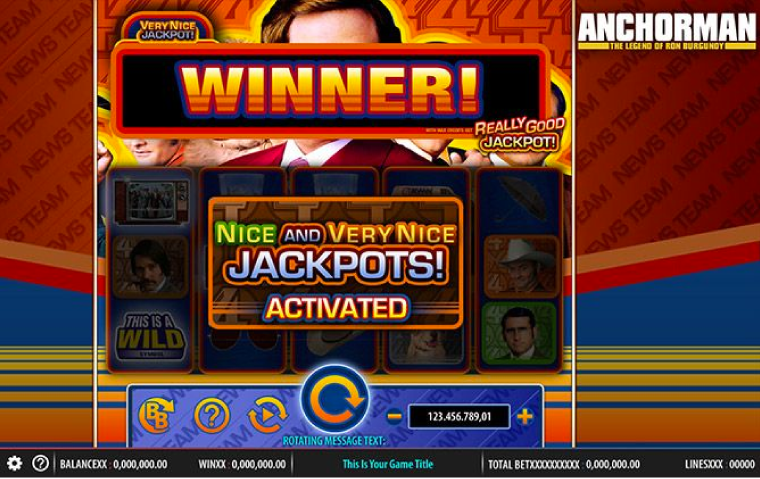 The aptly named 'This is a Wild' symbol may replace all symbols except the Bonus and Whammy symbols.

You can win up to 6 free spins since the screen expands to a 19-row layout with 117 pay lines. This section includes Fire Ron, Robe Ron, Anchor Ron, Coat Ron, Hat Ron, and Weight Ron, as well as a Car Baxter symbol.

Anchorman: The Legend of Ron Burgundy slot free spins can be won using the Whammy! symbol. It's possible to win up to 12 free spins, as well as a ladder with 12 steps that show on the screen. Each Whammy! sign that occurs on reels 2, 3, and 4 awards a prize based on the current ladder step.If you land more than one Whammy! symbol, you progress one step up the ladder. If you make it all the way to step 12, each Whammy! symbol will pay up to 13.33 times your bet.

You may use this function to spin the blue wheel for cash rewards ranging from 75 to 1000 times your initial bet. You'll receive one spin of the green wheel if you land on the Level Up part of the wheel, where you can win anywhere from 200 to 2000 times your stake. When you arrive on the Level Up section of the green wheel, you'll be offered the option to spin the red wheel for a chance to earn 2 to 10 times your stake, which will be applied to all of the wheel's wins.

You are offered 15 bottles to pick from and must select three of them for this activity.

For each decision you choose, you will win a monetary award. You may be given the opportunity to reveal +1 Pick, which will offer you an extra pick to help you win more. You may also choose one of five packages to reveal a multiplier ranging from 2 to 10 times your wager, which is applied to your bottle wins.

Play Anchorman: The Legend of Ron Burgundy Online on Slingo

Head on over to slingo.com to play the Anchorman: The Legend of Ron Burgundy slot game! If you fancy switching from the news to another channel, then why not try some of our other selections of casino games, Slingo games, Bingo games, and slot machines!