The Dragon Born slot has a lot of cool features, but the staggering 117,649 ways to win is the real deal. We're surely bold enough to enter the dragon's lair in search of golden treasure, as the odds of discovering a substantial reward appear to be in our favour.

The Dragon Born slot UK is a fun slot from Big Time Gaming, an Australian firm known for its gaming manufacturing and innovation, including the Megaways game system. Dragon Born introduces us to a faraway mountain world, where we will encounter magical creatures, sparkling armour-clad knights, a gorgeous damsel, and a jester, among other visitors. In the Far East, dragons are lucky emblems that symbolise power, happiness, wealth, and money.

Big Time Gaming's Dragon Born slot game is a Megaways slot, which means that each spin can produce up to seven icons per reel. Furthermore, wild multipliers can multiply the win ways by up to 7x on each reel. This corresponds to up to 117,649 possible winning combinations!

The era of kings and queens inspired the Dragon Born slot machine, as well as enormous dragons, who were the principal target of local knights. The gaming field is located high in the mountains, providing a spectacular view. A golden frame surrounds this field, which is encrusted with stones. Sound effects go back to the days of kings and give the slot a cinematic feel.

Starting with playing card enhancements, you'll see a range of symbols on the reels of the Dragon Born slot online. The colours vary from aqua 9 to purple A. The following item is a blue goblet, followed by a dazzling mirror. The knight wears green armour, the lady wears blue armour, the king wears red armour, and the queen wears purple armour. She has the power to multiply your bet up to fourfold. There's also a green banner emblem, a blue gemstone, and a red gemstone. The dragon sign, on the other hand, is the game's highest paying standard symbol, having the ability to multiply your investment by up to 84 times.

The Basics: How to Play Dragon Born Online Slot To play the Dragon Born slot UK, go to Slingo.com and download the game. While this game is inspired by mediaeval periods, it is actually rather modern and can be played on a variety of platforms, including the Dragon Born mobile slot. After the game has loaded, you must select your wager using the bet selector. Simply click the spin button after you're satisfied with your wager to begin spinning the reels; it's that simple.

The theoretical return to player (RTP) of the Dragon Born online slot is 95%, which is a little lower than the current market average, but with so many paylines, we can't really complain. The Dragon Born casino slot is set at medium volatility, which means that it should appeal to a wide range of gamers. Wagers on the Dragon Born slot start at 20p per play and run up to £40 per spin, so it's suitable for a wide range of budgets. 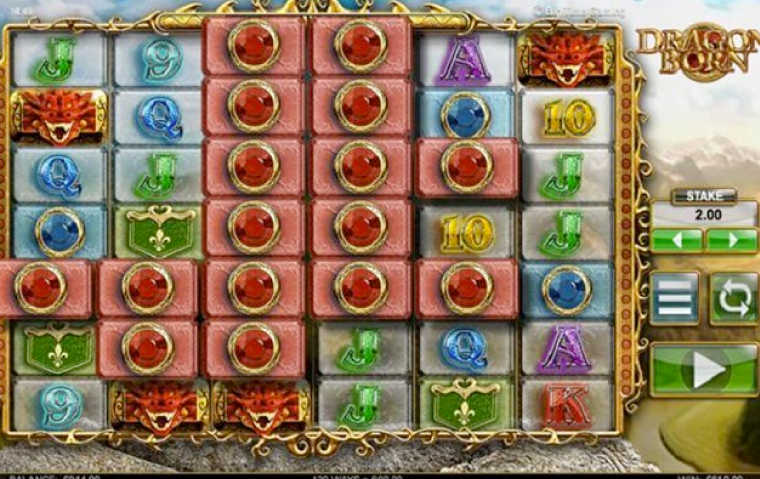 Each reel can include up to seven symbols. Wild reels additionally increase the number of possibilities to win per reel by up to x7, explaining why there are so many 'paylines.' This slot is similar to the classic 243 ways to win slot, only the reels are larger and pay left to right when adjacent to each other.

The court jester is the game's wild, and he will occasionally cover one or more reels. She has seven icons and a multiplier of up to seven times, though this isn't usually the case. The reels, on the other hand, can multiply each other, so a winning combination with two full reels wild and a 7x multiplier would result in a multiplier of x49.

You'll be playing on a second set of reels that are seven symbols high during the free spins bonus round, which means you won't need the wilds to make 117,649 megaways because they'll be included. You may also re-trigger the free spins by catching a single scatter diamond on the screen, which will award you one to five more spins. Although multipliers are no longer available, there are single and stacked wilds that cover the reels and make winning easier.

If you want to travel to an epic medieval saga then look no further than the Dragon Born slot machine. Sign up and play today at Slingo.com.

Confused about the difference between Slingo Riches and Slingo Rainbow Riches? Read our blog post to find out more! 18+ | Play Responsibly

Here is a review about Valkyrie Fire by Slingo.com. Click here to learn more about its feature and gameplay. 18+ | Play Responsibly

Here is a review about Mega Jade by Slingo.com. Click here to learn more about its feature and gameplay. 18+ | Play Responsibly