The Lightning Leopard slot machine is a fantastic slot from Lightning Box designed to let you experience life on the wild side! As you play for big wins, you'll come face to face with wolves, bears, and the titular leopard. On any spin, you can also find two amazing bonus features and one of four jackpots to win - sounds like some pretty supercharged action!

The setting of the Lightning Leopard slot game is North America in the dead of winter with a Native American theme. Snow-covered mountains and rocks can be seen in the backdrop view, which is behind the reels and beneath a starry sky. To further emphasize the wintery theme, even the playing card emblems are covered with snow! To make the environment more immersive, atmospheric music is playing in the background.

With strong beasts, a stunning mysterious maiden, and classic playing card suit symbols, the Lightning Leopard mobile slot online has an incredibly realistic and detailed set of icons. If you get two to five matching symbols on a pay line, The Native American Woman will pay between 2 and 300 coins. The Mountain Goat pays up to 200 coins, and the powerful Bear can be valued at up to 250 coins. Win between 10 and 130 coins when you hit the Wolf or Snow Flakes icons. The top prize for the Ace and King is 40 coins, while the top prize for the Queen and Jack is 20 coins.

The Basics: How to Play Lightning Leopard Online Slot 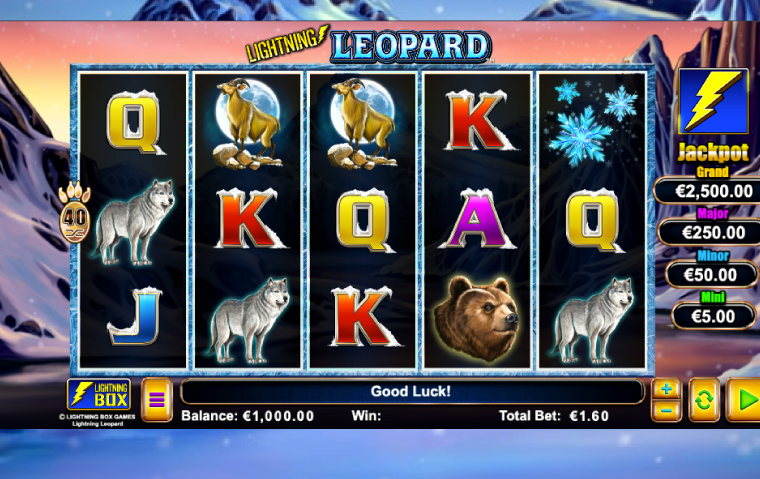 To begin spinning the reels, click the "spin" button in the lower-right corner of the screen.

You can win a prize from the paytable by getting two or more matching symbols on any of the paylines. To activate a bonus feature, you must match six Lightning Scatters or more. In order to change your stake in between spins, press the "+" and "-" buttons. Press the menu or hamburger button in the lower-left corner of the screen to view the paytable and game regulations.

The Lightning Leopard slot machine by Lightning Box has a 95.52% RTP which is a little below the current market average, and combined with a high volatility rating, could make this game a little too challenging for new or casual players. The game accepts wagers ranging from 0.40 to 50 for each spin. 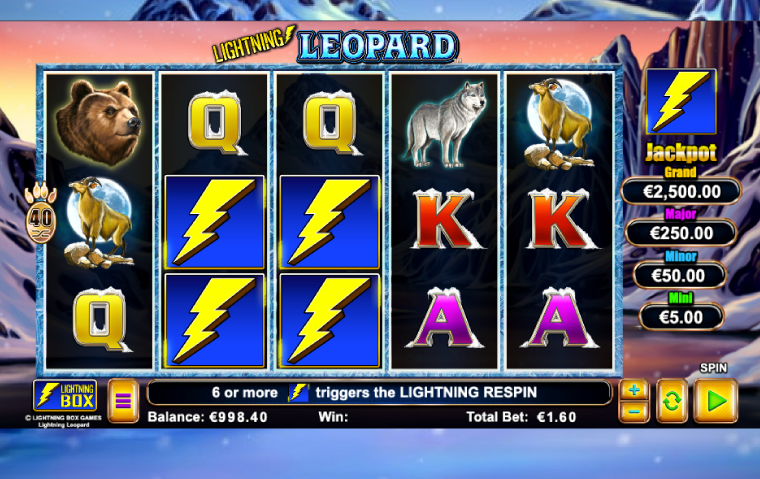 While standard payouts are not accessible during this round, all Lightning Scatters will be flipped to reveal rewards after the feature's conclusion.

When the other features conclude, jackpots could be given out at random. The jackpot amounts are not progressive and instead represent fixed values.

When the Lightning Scatters are turned over at the conclusion of the aforementioned extra features, if a Mini, Minor, Major, or Grand sign appears, you'll be awarded the relevant prize! Each extra feature has multiple ways to award the Mini, Minor, and Major prizes. The Grand, however, can only be won once in each feature.

The Lightning Leopard slot online is an exciting slot perfect for play in the cold months. To try out this game at any time of the year, sign up and play today at Slingo.com.