Welcome to the Slingo Spotlight segment of our blog where today we’ll be bringing you a Pay of Dead slot review. So, if you’re looking to join a Day of the Dead party, then keep on reading!

About Slingo Spotlight: Pay of the Dead 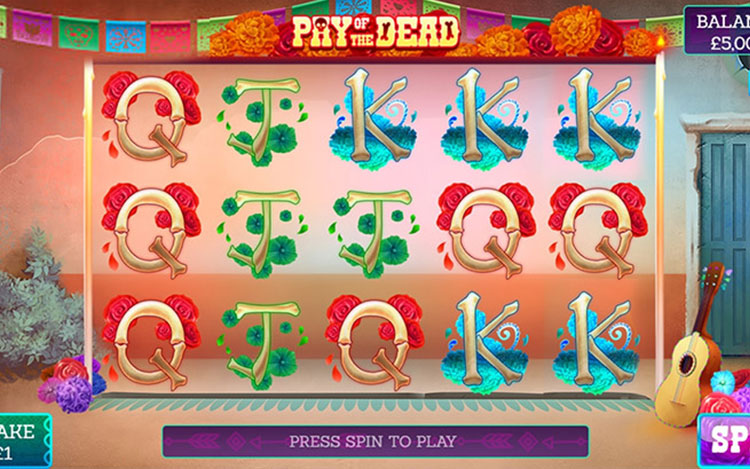 The Day of the Dead, or Dia de Los Muertos, is a well-known Mexican event that has spread around the world. With its vivid colors, authentic Day of the Dead motifs, and captivating characters, Pay of the Dead, one of the greatest Gaming Realms slots, truly depicts this vibrant holiday. With its cheerful Mexican Mariachi style, the soundtrack enhances the Mexican theme - you can even see a Mexican instrument lying against the side of the scene!

If you've never played a Day of the Dead game before, this one is a must-try because the idea is executed so wonderfully. Pay of the Dead is definitely worth a try if you enjoy mystery or frightening themes, as well as games with a hilarious or comical tone.

You can get an endless number of free spins in Pay of the Dead. On the 5x3 grid, there are plenty of wilds and free spins, as well as a 95% return to player ratio.

How To Play Slingo Spotlight: Pay of the Dead

Pay of the Dead is a simple game to master. It's fairly simple, therefore it's appropriate for players of all skill levels. Setting your stake and clicking spin to start playing is as simple as it gets. Players will be glad to learn that Pay of the Dead has a very basic layout, allowing them to see everything they need quickly. With such simple gameplay, even the most unskilled player will be able to pick up on Pay of the Dead quickly and begin enjoying it right away.

Slingo Spotlight: Pay of the Dead RTP and Wager Limits

The Pay of Dead slot game has a theoretical return to player (RTP) of 94.9%, which is quite a bit under the current market average, but as a medium volatility title, this game shouldn’t be too challenging for players with a bit of slot experience. Wagers on the Pay of the Dead Game start at just 20p per spin but can reach up to £50 per spin if you have the budget for it. 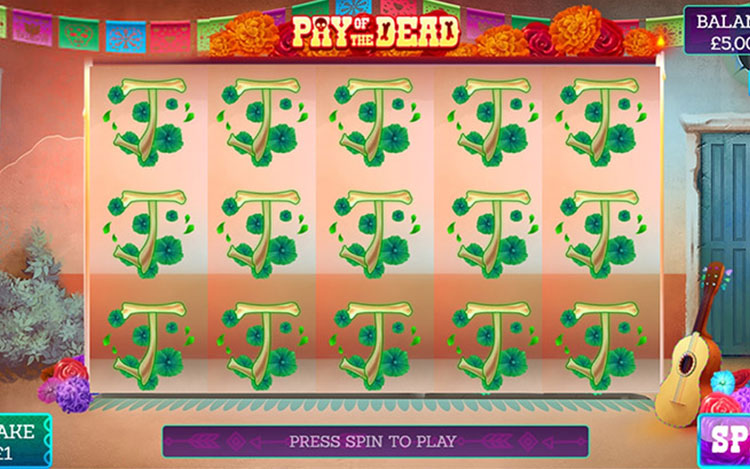 This is probably the standout feature of the Pay of Dead Game, thanks to its unlimited spin potential. Players have three lives, and the bonus round will only end when all the lives are used up, meaning there’s no telling how many spins you’ll end up playing! To add to the thrill and suspense, the game includes a strange and spooky white ghostly face, which is beautifully ornamented as you could anticipate, and when this ghostly woman appears on the reels, players lose one of their lives. However, there is a silver lining here: losing a life increases the multiplier for any remaining wins by 2x, 3x, 5x, or 10x, depending on which candles triggered the spins. Obviously, the red candles are your best choice, and with a potential 10x multiplier, the rewards may be substantial.

The Red Hot Re-spins feature is a fun extra round that appears when players land two bonus candles. Players can purchase a re-spin in the hopes of landing that elusive third scatter symbol that will activate the free spins. The cost of re-spins is determined by the player's wager. This can be costly, but it is the player's choice, so each player must decide how eager they are to get their hands on those free spins!

The Pay of the Dead slot game can be played on any device as it was created using HTML5. This means you can play the Pay of Dead game on the go if you choose on your mobile phone or tablet.

Come and Play  Slingo Spotlight: Pay of the Dead on Slingo

If you want to play the Pay of the Dead slot machine then visit us at Slingo, the online casino like no other! If you love slots and Slingo games then you’ve come to the right place as we have a huge selection of titles. Sign up and play today.